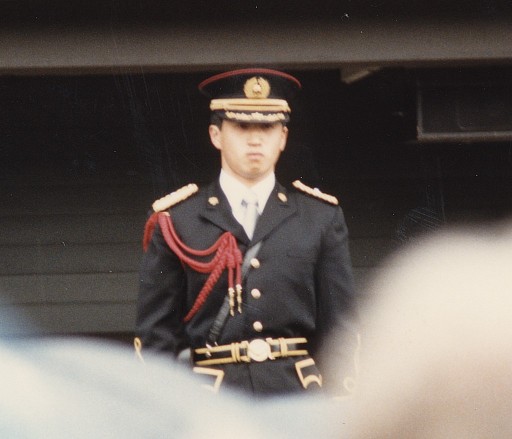 Imagine for a moment, that in the distant future, the first time traveler makes his (or her) first voyage. He's been working in his garage for months, maybe years on whatever interesting things he can think up. There are all sorts of homemade robots and automated devices that scurry about his house. He is frequently seen taking walks-- he's a social person generally, except at night when he says goodnight to his friends and disappears into his workshop. Then one day, he's gone. And he never comes back. He's transported himself to a time and a place where things are not quite what he thought and he's stranded there to live out his days. Whoops.

Imagine the first country that makes the first trip in time and arrives safely back in the present. Perhaps there are a few moments of overlap (probably floating point errors) where the world wonders at the two identical men standing beside the machine. The world would take notice.

Eventually it would become cheap enough that large corporations could devise time machines, or perhaps there would be a sort of time war-- but whatever the catalyst (perhaps one day all the world's bananas suddenly disappeared), eventually time travel would be regulated and policed. People wouldn't be allowed to just travel about the timeline willy-nilly.

So why have we never seen someone from the future? Well my guess is that we have. But as I said before, there are strict rules about that kind of thing in the future. If someone had come back in time, either they are a researcher with strict instructions to never interfere with the people local to that time, or they are a criminal, in which case the time police would catch them and simply rearrange the timeline such that the event never occurred in the first place. That's why you're sitting there and I'm sitting here and we both doubt that time travel will ever be a reality.

Now, we've all thought about what we would do if we could go back in time. The mind's first jump is obviously to ride a dinosaur but the gravity and irrelevance of such an action kicks in and you devise a new plan. Just about every time travel movie has the same notion: you play the stock market. You take today's paper and you go back in time (just one week will do) and you clean up. There's no real limit to how many times you can do it-- heck maybe that's been Warren Buffet's plan all along. But I doubt it.

The problem is, the time police know all about this scheme. There are all sorts of ways they monitor this stuff-- it's as easy to watch the time dials as it is to watch a cyberhacker reset the balance on his library card. But that would be today's equivalent of marching into a bank with a gun and demanding all the money from the vault; except with the time police, they can wipe away the fact that it ever happened in the first place.

This is where our friend Satoshi Nakamoto comes in.

Nakamoto is most probably a time cop. He sits at his desk fiddling with numbers and computers to track down the perps. Then he goes out into the field and busts some skulls. Nakamoto is good. He's great at his job but he can never seem to climb the ladder. Or perhaps, just as curiously, he just doesn't want to... Why does he, an old timer, still sit with the rookies? Why doesn't he ever accept the captain's invitation to grab a beer after work? It's because Nakamoto has an end game.

As a civil servant, Nakamoto probably makes next to nothing, and what's worse-- his accomplishments have all been erased. Imagine spending months or even years tracking down fugitives through monumental futuristic cites bathed in neon, through Old Jerusalem when it was new, through the open plains of The New World when Mother Nature still owned the land: and when you finally catch them, the entire event never happened. It's a tough gig.

Nakamoto wanted out and he knew how to do it. He watched criminal after criminal screw the pooch. They made absolutely every mistake possible. See, the problem is: they are always too loud. After all, that's the only way to make money. How can you get paid otherwise? That's why Nakamoto has opted for an entirely new strategy.

Think of how brilliant it is! And it all makes sense! Nakamoto has amassed what-- $400 million so far? With endless opportunities to invest, to buy, to sell. In our lifetimes he may have the power to crush kingdoms and dictate laws all through a veil of mathematical anonymity.

Nakamoto, the time traveler, will never be identified-- not ever. Because if we knew who he was, none of this would have happened.